Ithaca New York Wants to be a Model in Decarbonization 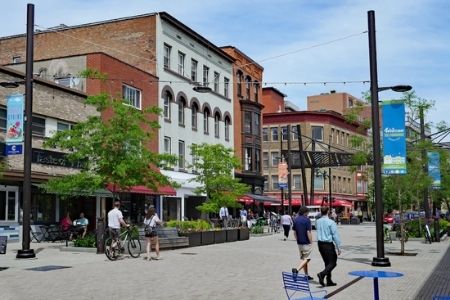 Late Wednesday night, the city of Ithaca, N.Y., voted to electrify and decarbonize its buildings. It’s the first such initiative of its kind in the country.

“We are being very aggressive,” said Luis Aguirre-Torres, Ithaca’s director of sustainability. “I’m very excited but, at the same time, it’s a lot of work ahead.”

The city of about 30,000 people consists of some 6,000 homes and buildings. Decarbonization would involve looking at everything from how a building is heated to what appliances it uses, with the aim of moving away from the consumption of fossil fuels such as oil and natural gas.

“It’s a project for the whole city, not just municipal buildings,” said Aguirre-Torres.

Buildings account for nearly 40 percent of greenhouse gas emissions in the United States. Ithaca’s initiative is projected to cut about that much from the city’s overall carbon footprint — saving approximately 160,000 tons of carbon dioxide. That’s the equivalent of the emissions from about 35,000 cars driven for a year.
“There isn’t a single day where I don’t worry about what climate change means for our kids,” said Donnel Baird, a founder of BlocPower, a Brooklyn-based company focused on “greening” aging buildings. Ithaca chose BlocPower to manage its initiative. Baird said the vote has marked a milestone.

Ithaca’s common council voted unanimously in favor of this latest move, which is part of the broader Green New Deal that the city approved in 2019. That measure calls for the city government to meet all of its electricity needs with renewable energy by 2025, as well as reduce its vehicle emissions by half. Most ambitiously, though, it set a goal of being a carbon-neutral city by the end of the decade.
Aguirre-Torres said the city lost precious time to the coronavirus pandemic, which effectively shrank the timeline from 10 years to eight. “I had to come up with a very aggressive strategy,” he said.
The decarbonization effort is officially called the Efficiency Retrofit and Thermal Load Electrification Program. Building improvements could range from swapping natural gas and propane cooking stoves with electric induction cooktops to installing solar panels…

Read the full article, This U.S. city just voted to decarbonize every single building, in the Washington Post.